The summary of the lecture can be found below.

The connection of an increasing number of renewable sources and devices whose operation is based on power electronics (FACTS, converters, HVDC systems) to the transmission power grid affects the power quality and electromagnetic transients that may occur in the power system. The high-frequency transients also affect traditional components of the transmission system, such as power transformers, which are of strategic importance for the continuous operation of the system, as their failure can lead to large financial costs. Traditional low-frequency transformer models cannot be used for analyzing such phenomena and to simulate the interaction between power transformer and network (resonance, power quality, switching/lightning overvoltages, network frequency response, transients generated by power electronics, etc.).

To better determine the required overvoltage protection and equipment insulation levels during the power network planning phase, it is suggested to use EMTP simulations with detailed high-frequency network models. Such simulations include the verification of potential scenarios in the network and the calculation of overvoltages that can reach the power transformer. The overvoltage waveforms must be compared with the standard impulse test waveforms according to which the insulation of the transformer is dimensioned. According to the IEC standards, if possible, frequency-dependent transformer models based on transformer response measurements should be used in such simulations. In the literature, such models are classified as black box models that can describe in detail the behavior of the transformer from its terminals. There are also detailed transformer models, based on the RLC networks, whose parameters are calculated using analytical expressions or FEM simulations (gray and white box models). Such models require knowledge of transformer geometry, which must be requested from the transformer manufacturer. Simpler models require only the geometry of the transformer window. Models based on geometry enable the calculation of overvoltage distribution along transformer windings and can be used for various insulation stress analyses. In the world, it is a practice for power utilities to develop their transformer models to be able to predict potentially risky situations and severe transients.

In addition, it is necessary to monitor transient phenomena in the power networks, using devices for measuring transient phenomena. Such devices are characterized by a fast acquisition card and the ability to record transients without distortion up to frequencies of a few hundred kHz. It is common for the transient monitoring device to be part of the transformer monitoring system and to use a HV bushing on the power transformer as a capacitive voltage divider. Such devices can provide valuable overvoltage statistics, which consider the local character of the area, and can help when planning or reconstructing the network, as well as when correcting/improving overvoltage protection. During the seminar, several EMTP calculations of switching and lightning overvoltages were presented that can affect the power transformer. An overview of power transformer models for fast transients was given and the possibility of measuring overvoltages in the power network was discussed. A review is given on the application of measured overvoltages on power transformer terminals for calculation of frequency domain severity factor (FDSF) and its potential application for health index estimation.

Comparison between calculated and measured transferred overvoltages at LV terminal (phase A) of power transformer is given when full (Fig. 1) and chopped (Fig. 2) lightning impulse voltage is applied on HV terminal (phase A). Three-phase power transformer 96.7/10 kV, 36 MVA, YNd11 was considered in this case. Black-box transformer model based on frequency response measurements was developed and experimental verification was successfully carried out confirming the accuracy of the model. 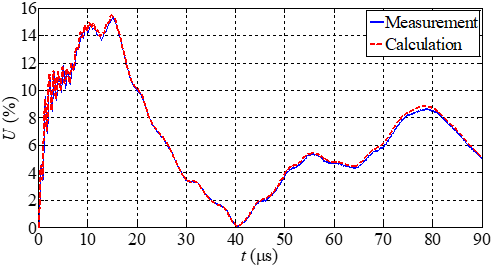