Establishment and Activities of the Department

The Department of Energy and Power Systems was founded in 1934 as part of the then Technical Faculty and under the name Department of High Voltage.  Prof. Juro Horvat, founder of the department, came to the Faculty in the summer semester of the 1932/33  academic year. He taught the subjects: Generation of Electricity, Transmission of Electricity, Distribution of Electricity and Transients in Electrical Devices. As head of the Group for Production, Transmission and Distribution of Electricity, he founded the Department of High Voltage in order to provide laboratory work as part of instruction for students, as well as scientific and professional work in these areas. He began by collecting devices, instruments and individual parts for the collection and for the future laboratory, in addition to books and magazines for the Department’s future library. However, during World War II, which soon followed, the activities of the Department stagnated. Prof. Horvat went abroad and retired in 1943. 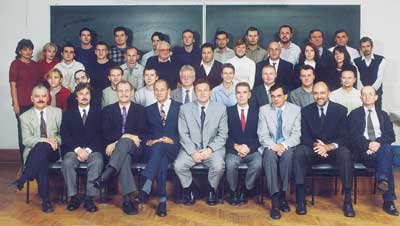 The activities of the Department continued after the war ended, initially with the help of part-time professors Mladen Dokmanić, dipl.ing., who later became a full professor, from the summer semester 1945/46, and Fedor Jelušić, dipl.ing., from the winter semester 1946/47 until the end of the winter semester 1947/48. In the 1948/49 academic year, Vladimir Žepić, dipl.ing., became a permanent professor with the title of associate professor, who then took on the role of Head of the Department. Subsequently, new professors joined the Department and contributed to its development as well as the development of the Faculty over the course of many years, thus sealing its reputation on a wider scale. In the summer semester of the 1949/50 academic year, Božidar Stefanini became an assistant professor and shortly afterwards, in 1951, Hrvoje Požar was hired as a part-time assistant professor.  Deemed to be politically unfit by the administration, at the end of the winter semester 1951/52, prof. Žepić was forced to leave the Faculty. At the start of the 1952-53 academic year, Božidar Stefanini became Head of the Department.

From the beginning of the 1950s, the Department began to rapidly develop, which, among other things, was made possible by improved facilities. The Department was initially located in one, and later two rooms at Roosevelt Square no. 6. In 1947, it was relocated to the first floor of the building in Vukotinovićeva Street no. 2, where it then had enough space secured for its development and staff, lectures and exercises, and even for the installation of laboratories. The most significant was the Laboratory for High Voltage Engineering, founded in 1954, whose basic equipment was obtained from the power industry, while Boris Markovčić, dipl.ing., greatly contributed to its installation. In 1953, the Department received a photo laboratory for the production of slides used for projections in lectures. The department continued to grow in terms of staff, lecturers and support staff, especially when two study programs were introduced within the High Power study program: Electrical Industry and Power Utility. The Electrical Industry study program was carried out under the Department of High Voltage with the following core courses: High Voltage Engineering; Electrical Plants (two-semester course); Electricity Transmission; and Networks and Installations, and with elective courses that covered the area of ​​economic load distribution, voltage regulation and frequency in power systems, electricity transmission stability, electric lighting and electricity economy. In addition to lectures within the Department, special emphasis was given to laboratory exercises. A practicum for High Voltage Technique was introduced, which students completed through 6 experimental exercises. Special emphasis was also given to professional work, which was carried out with increased cooperation with the economy. At that time, scientific work was revived, not only amongst individual members of the Department, but also by the Department as a whole and with the use of an increasingly well-equipped laboratory and library.

The conditions for lecturing and the professional and scientific work of the Department continued to improve, especially in 1963 with relocation to the sixth floor of the newly built building (C) of the Faculty of Electrical Engineering in Unska Street no. 3. The High Voltage Laboratory was moved to Building B, while later in the 1960s the Laboratory for student exercises in Electricity Transmission was installed and the Laboratory for Electrical Installations was built in Building B. The available space also allowed for a well-stocked and modern library, which had about 2,000 books at its disposal in the late 1960s, and received about 40 various journals per year. It is important to note that the use of digital electronic computers for solving problems in the power industry began in the early 1960s, thus the installation of the IBM 1130 computer within the Faculty’s Computing Center was immediately reflected on the widespread use of computers in lecture and the professional and scientific activities of the Department. Professors Stefanini and Požar earned special merits for all of this, and thanks to them, lectures were constantly modernized to keep up with the world’s trends. Meanwhile, they also supported development of younger staff, which was evidenced by Mario Padelin, Milan Šodan and Željko Zlatar joining the teaching staff in the later 1960s. In the seventies, there was a change of professors in the core subjects of the Department, welcoming a new generation of lecturers to teach compulsory courses. In addition to the previously mentioned lecturers, these were Vjekoslav Filipović, Srđan Babić, Mirjana Urbiha-Feuerbach and Vjekoslav Srb (part-time professor).

In 1977, the study program Nuclear Energy was introduced in order to educate electrical engineers in nuclear issues, which was needed due to the construction of the Krško Nuclear Power Plant. Prof.dr.sc. Danilo Feretić is especially responsible for the development of this program. In 1978, the Department changed its name to the Department of Energy and Power Systems. An incentive for improving the Department was the purchase of a computer in 1980. During the 1980s, the Department further developed by increasing its staff of young lecturers for teaching newer courses: Zdravko Hebel, Vladimir Tuk, Vladimir Mikuličić, Sejid Tešnjak, Slavko Krajcar, Nikola Čavlina, lvo Uglešić and Nenad Debrecin. The development of the Department is especially reflected by an increasingly extensive scope of professional and scientific work, cooperation with the economy and international professional and scientific cooperation, as well as international exchange and visits by experts, most notably in regard to expanding activities in the area of nuclear energy.  All this resulted in significantly increasing the Department’s staff, most of whom obtained their academic ranks while working for the Department.

Extensive and intensive teaching has given fruitful results. Within the Department, since the 1956/57 academic year, a total of 1,454 students graduated with a bachelor’s degree, a total of 163 students achieved a master's degree, and 43 students obtained a doctor of science degree in electrical engineering. Before the 1956/57 academic year, 305 students graduated with a bachelor’s degree and 2 students received doctorate degrees.